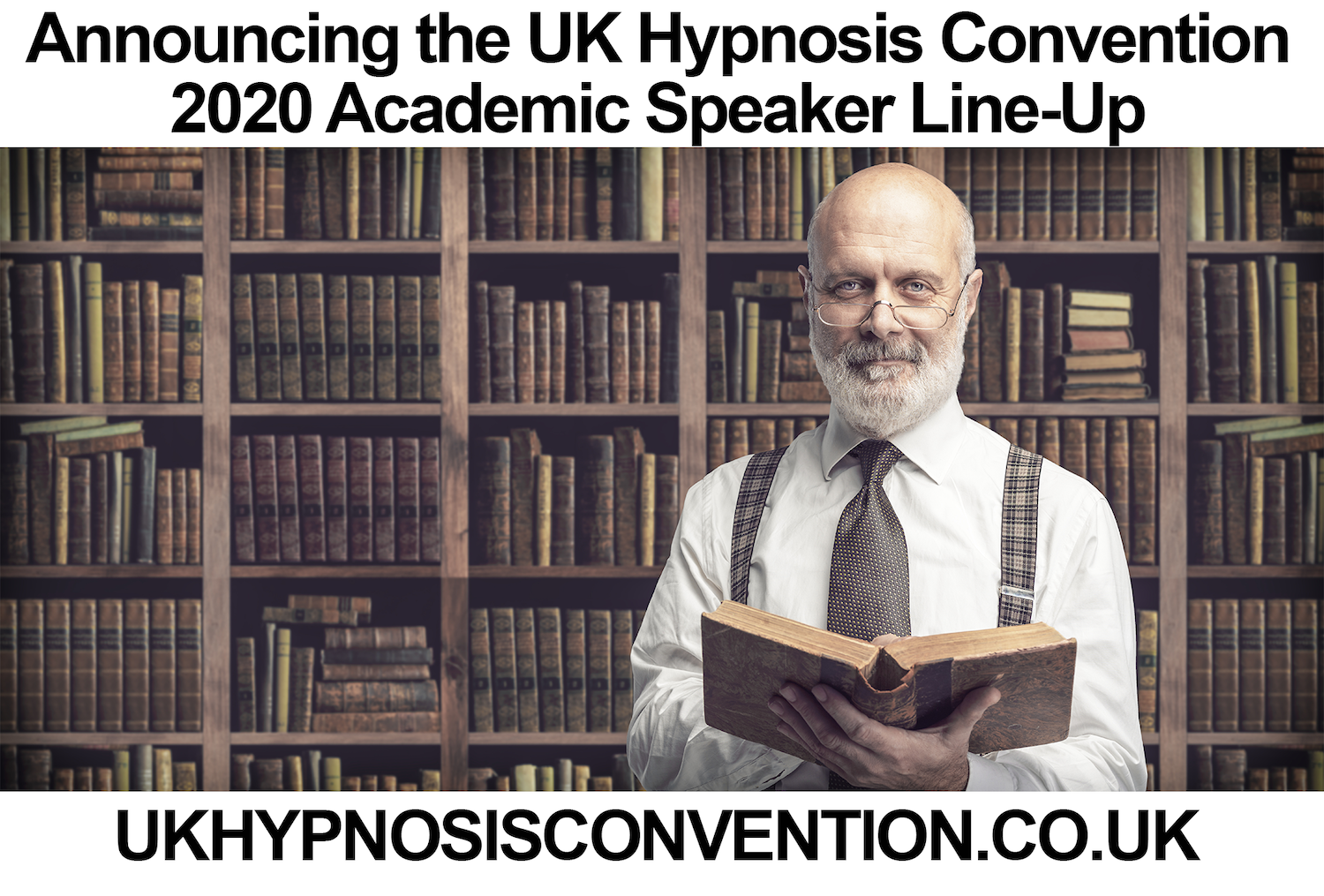 As I did last year, I thought I’d share with you our academic line-up in a video, with written details below. There will be more extensive details and descriptions added to the speaker list for the 2020 event here on the relevant page of this website, so read that for further information. I am really excited about having all of these really impressive hypnosis academics covering such a diverse range of topics at this year’s event.

Those who attended last year (2019) will know that one of my aims since taking over the convention was to create more awareness of the academic research and leading academic authors in our field, and to champion advanced levels of education, so as well as embracing the diversity of our field and featuring leading hypnotherapists and trainers you are familiar with, I want to bring you the cream of the academic world too and really aim to enrich your convention experience.

I have already announced our keynote speaker as Irving Kirsch (follow the link to read more details) who will be speaking on the Saturday on the topic of Using Hypnosis as a Non-Deceptive Extra-Strength Placebo. He’ll be highlighting Similarities between hypnosis and the placebo effect and drawing upon his considerable research. At the Saturday night Gala dinner, he will be presenting “The Emperor’s New Drugs: The Myth of Antidepressants” and I believe it will make for a fascinating evening.

This year, I shall be sharing what I consider to be some important research findings from my work here at Bournemouth University. In my presentation Self-Hypnosis as Phenomenological Control: Has Self-Hypnosis Destroyed The Hypnosis Stroop Task Performance Legend?

On the speaker listings, do have a good read of my lecture outline as it contains some potentially important implications for the entire field of theoretical and practical hypnosis and asks some major questions of cold control theory and whether hypnosis is actually the main component in the legendary stroop task performance hypnosis research. Anyway, here are our other academic presenters:

Professor Christina Liossi.
Chair in Paediatric Psychology at the University of Southampton and an Honorary Consultant Paediatric Psychologist, at the Paediatric Chronic Pain Clinic, Great Ormond Street Hospital for Children. Professor Christina Liossi has worked as an academic and clinician in the UK and abroad and has cared for children with various chronic medical conditions including cancer, cystic fibrosis, chronic kidney disease, epidermolysis bullosa, and sickle cell disease. Christina is one of the world experts in paediatric pain.

Christina’s randomized controlled clinical trials have been critical to the establishment of hypnosis as an evidenced-based intervention in the care of children with cancer. Christina has contributed to national and international evidence-based guidelines on acute and chronic paediatric pain, pain in children with cancer and sedation in children.

Her lecture is entitled Clinical Hypnosis in Paediatric Care.
Our current understanding of the neurophysiological mechanisms of hypnosis will be presented drawing mainly from research of mechanisms of hypnotic analgesia in adults and b) the current research literature regarding the use of clinical hypnosis in paediatric care will be reviewed.
She will highlight that Clinical hypnosis is a powerful therapeutic technique for the management of acute and chronic paediatric pain, although the quality of evidence for its efficacy varies, depending upon the type of pain. Hypnosis is an evidence-based intervention for procedure-related pain, and appears promising in the management of chronic pain.
In paediatric care in general, clinical hypnosis is a highly effective tool for helping children in many areas, both physical and emotional.

Peter Naish.
We will also welcome Peter Naish whose lecture is entitled Why Hypnosis Facilitates Recovery From PTSD.

After obtaining his doctorate in the University of Oxford’s Department of Experimental Psychology, Peter spent much of his time in academia, researching hypnosis. However, he also had a spell carrying out research for the Ministry of Defence, and there he became involved with the issue of PTSD. He soon spotted the parallels and developed novel apparatus to explore the nature of the connections.

Peter has held the post of President of the Section for Hypnosis and Psychosomatic Medicine, at the Royal Society of Medicine, and now has the same role with the British Society of Clinical and Academic Hypnosis; he is also a member of the Board of Directors of the European Society of Hypnosis. He is a strong advocate of the public dissemination of science, and is a regular speaker at the major British science festivals. Additionally, he has lectured at the Science Museum, the Royal Society, the Dana Centre for the Brain and ‘Science on the Fringe’ during the Edinburgh Festival.

The talk will outline the neural and epigenetic mechanisms that underpin some people’s reaction to severe trauma: i.e. to develop posttraumatic stress disorder. It will be shown that there are a surprising number of parallels between the characteristics of PTSD and the phenomena of hypnosis, to the extent that sufferers are usually highly hypnotically susceptible. This potentially gives hypnosis a unique role in the treatment of PTSD.

Éva I. Bányai, PhD, is a Professor Emeritus of Psychology at the Department of Affective Psychology, Institute of Psychology, Eötvös Loránd University (ELTE), Budapest, Hungary. After earning her doctorate in psychology at ELTE in 1973, she spent a fellowship year with the legendary Ernest. Hilgard at Stanford University where she developed active-alert hypnosis.

Her main research interest is studying the psychophysiological, behavioral, phenomenological, and social aspects of hypnosis from an interactional standpoint. Recently, she has been involved in developing new hypnotherapeutic methods for healing cancer patients, and in conducting research on the effect of hypnosis in treating high risk breast cancer patients. She has been heavily engaged in teaching hypnosis research and hypnotherapeutical methods to researchers and clinicians both in Hungary and abroad. She is a Past President and a Honorary Lifetime Member of both the European Society of Hypnosis (ESH) and of the International Society of Hypnosis (ISH). See her bio on the UKHC website to also see some of the many accolades she has been awarded over the years.

Her lecture is entitled Basic Research With An Interactional Perspective On The Nature Of Hypnosis.

After summarizing the theoretical considerations standing in the background of the approach of hypnosis from an interactional perspective, she will describe the complex, multidimensional experimental paradigm her research team has been using since 1982. They have been studying the physiological, behavioural, subjective experiential, and relational characteristics of both participants (hypnotist and subject) of the hypnosis interaction simultaneously, and analyse the interrelationship of these factors that play an important role in the development of hypnosis. The results indicate that hypnosis is especially effective in mediating social support, because it develops a strong, intensive interpersonal relationship between hypnotist and hypnotized subject. There is so much more I want to say, but do read up on this at the website. We also welcome Peter Whorwell who is director of the Neurogastroenterology unit at Wythenshawe Hospital and Professor of Medicine and Gastroenterology at the University of Manchester. His unit undertakes research into the clinical, epidemiological and physiological aspects of Irritable bowel syndrome and other functional gastrointestinal disorders as well as receiving referrals of complex cases from all over the United Kingdom. He personally sees approximately 600 new patients with irritable bowel syndrome every year. He is invited to speak on his area of expertise all over the world and has over 380 publications in a variety of books and peer-reviewed journals. He also runs a hypnotherapy unit which is used for treating these patients as well as undertaking research into this phenomenon. Professor Whorwell is an advisor to a large number pharmaceutical companies and other organisations in the health care arena. His lecture will primarily describe the problem of IBS and the challenges associated with its treatment with particular focus on hypnotherapy. His work has seen hypnosis being featured in the Lancet journal, which is virtually unheard of.

Peter Whorwell.
We also welcome Peter Whorwell who is director of the Neurogastroenterology unit at Wythenshawe Hospital and Professor of Medicine and Gastroenterology at the University of Manchester. His unit undertakes research into the clinical, epidemiological and physiological aspects of Irritable bowel syndrome and other functional gastrointestinal disorders as well as receiving referrals of complex cases from all over the United Kingdom. He personally sees approximately 600 new patients with irritable bowel syndrome every year.

He is invited to speak on his area of expertise all over the world and has over 380 publications in a variety of books and peer-reviewed journals. He also runs a hypnotherapy unit which is used for treating these patients as well as undertaking research into this phenomenon. Professor Whorwell is an advisor to a large number pharmaceutical companies and other organisations in the health care arena. His lecture will primarily describe the problem of IBS and the challenges associated with its treatment with particular focus on hypnotherapy. His work has seen hypnosis being featured in the Lancet journal, which is virtually unheard of.

She currently works fulltime in her private practice in Antwerp (Belgium). She is international trainer and supervisor in hypnosis and in psycho-traumatology. She is actively involved in training and supervision in hypnosis – basic training, information sessions on hypnosis, training in hypnotic communication in medical practices and hospitals, basic / specialized /advanced workshops in hypnosis and Ericksonian Hypnosis.

She has lectured and has given workshops in many international hypnosis congresses of ISH and ESH and was invited to give workshops and training in many hypnosis societies and psychotherapy societies, in Belgium, in different European countries, Turkey, Canada, China, Iran, USA and all over the world in Dutch, English, French and German. She published some papers on hypnosis for burnout, stress control, happiness.

She will start with an overview of what she sees as the “Neuro-hypnosis Cycle” and be followed by discussion on the importance of creating rapport in hypnosis, as it mobilizes the Social Engagement System or Ventral Vagus system, promoting safety and calmness: a prerequisite to face difficult life issues. In this interaction process, neuroception and a coregulation play an important role as it learns and helps clients to better regulate their state. Recent research demonstrates changes in network connectivity in the brain and gives evidence of how hypnosis improves mind/body interactions and changes.

She discusses how ‘Brain-wise’ therapists mobilize processes working on a deeper experiential level and not do not restrict therapy to cognitive changes and insight. As a result of attending this lecture participants will be able to:

Treating ‘Eco-Anxiety’: the power of cognitive behavioural hypnotherapy
Bill states that “Eco-anxiety is an overwhelming sense of impending environmental doom and a chronic fear for the future state of the planet and future generations. The presentation will cover:
• Understanding eco-anxiety – cognitive behavioural and metacognitive models
• Dysfunctional coping strategies – what behaviour maintains and enhances eco-anxiety?
• The power of Cognitive Behavioural Hypnotherapy and the ‘cognitive-behavioural’ approach”

This is a formidable line-up (albeit in my highly biased opinion), with a huge amount for us all to learn and benefit from theoretically and practically. It will highlight impressive research from some of the foremost academics and authors in the hypnosis field. Frontline hypnotherapists and hypnosis professionals simply do not get to see these kinds of lectures anywhere else and they are rarely available outside of academic events and organisations. It is an important part of my role with this event to give you access with this, to attempt to hi light the value of this level of education and for it to help us all move forwards as a field. Myself, Irving Kirsch, Christina Liossi, Bill Sheate, Nicole Ruysschaert, Peter Whorwell, Eva Banyai, Peter Naish – all speaking back-to-back in the main lecture theatre on the Saturday of the convention.

You can buy your tickets at the relevant page of this website. Hope to welcome you for what promises to be an exciting and informative convention.